While Wandiful Produce is best known for its variety of fresh chestnuts and chestnut-based products, owner Megan Hughes says that getting people to understand, appreciate and buy chestnuts has been a difficult task. In order to market their products, the key for Megan and her partner Geoff Boadle has been education. Megan’s background in environmental education means that chestnut farming has also become a way to educate people about where their food is coming from.

During a trip to the south of France, Megan was astounded by the intense excitement and anticipation surrounding chestnut season in the small villages she visited. This was distinctly different from her experience in Australia, where chestnut growers typically sell to wholesale markets and have no idea who buys the produce or what is eventually done with it.

Megan came home wanting to redefine the existing paradigm and create a greater connection to seasonality and local produce. To do this, Megan realised she needed to connect directly with customers and restaurants to show them chestnuts’ value, and the variety of ways to use them.

Below are three ways that Wandiful Produce have attempted to market their produce through education.

Opening a commercial kitchen and café

Central to creating an on-site kitchen and café was Megan’s belief that they could “introduce people to chestnuts through their palates.” Megan recognised that few people knew how to cook chestnuts or incorporate them into their diet. The café therefore became a space where the farm could showcase the quality of their produce, get people to actually taste and enjoy chestnuts, and give them ideas about what they could do with chestnuts at home. For Megan, this was the best way to engage customers.

By allowing people to experience the beauty of the orchard – especially during the Autumn chestnut harvest – Megan hoped customers would be better able to appreciate and value where their product had come from, as well as the relevance of seasonality. Instead of just buying a bag of chestnuts from the supermarket, customers can engage with what they are buying and pick their own chestnuts from the orchard floor.

“Being a part of the corporatisation of food is not a nice thing, and many people are pissed off about being forced to shop in supermarkets,” Megan says. By inviting people to come to the farm, Wandiful Produce allow customers to have a greater connection to their food and seasonality, and be part of a fairer food system. These farm tours and pick-your-own experiences have proved to be very popular with customers, and therefore are a key form of engagement and marketing.

For customers, education around how to cook chestnuts has been key. In this way, the biggest educational element of the café is cooking demonstrations, where people can learn different recipes – many inspired by the couple’s experience and networks in France.

On top of this, Megan hands out recipes at markets. This has proven to be so successful that Megan is planning a recipe book, with lots of basic information on chestnuts. By educating people on how to cook with chestnuts, Megan hopes that she can change people’s perceptions of chestnuts and get them to essentially add a new vegetable to their repertoire. Ultimately, this increased understanding will reflect in greater sales in the future.

Wandiful Produce is located in Australia’s biggest chestnut-producing region, yet few restaurants in the region feature chestnuts on their menu. While Wandiful Produce has had success with a few local restaurants buying their chestnut flour and hazelnuts for deserts, none have featured actual chestnuts. Megan believes that there is potential for the region to reflect the kind of chestnut-pride that she observed in France, but this will require a significant educational effort. At the moment, Megan is planning how best to target and approach different restaurants and with different ways they could incorporate chestnuts into their menus. Connecting directly will be very important in this.

While Wandiful Produce has found these three ways to be quite successful, Megan believes they are still in the ‘educational phase’ and have more work to do for their chestnut harvest to be fully viable. Targeting the right customers and restaurants and improving their understanding of chestnuts is what Megan believes will help them into the future. 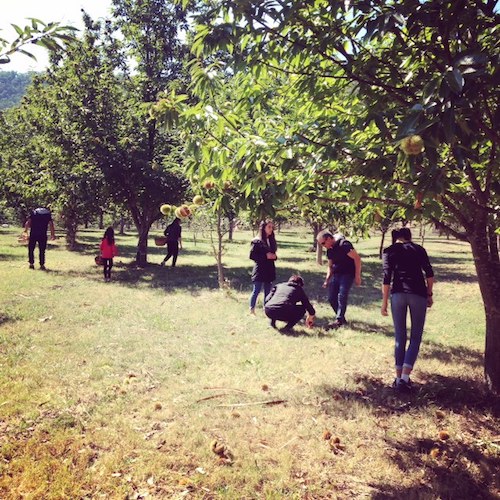